CLEANING FIRM SET TO SHINE AND GROW WITH MOVE 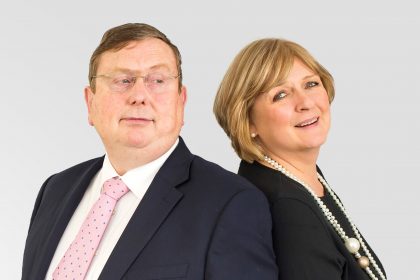 Husband and wife team Tim and Suzanne Davy have seen rapid expansion in the growth of their business, Moorland Contract Cleaning (MCC) since its formation in 2012.

The business has reached a significant stage in its evolution coinciding with a recent move to new headquarters in an iconic refurbished building in the Staffordshire Moorlands. The growth has been no accident but is the result of years of business experience and some canny decisions along the way.

The company has grown over the past six years to a 170-employee operation working in over 80 customer locations. 2018 saw a move from a small office at home to brand new headquarters at Daisy Bank House in Cheadle, a former nursing home which has been converted to business use by Cheadle based Hewitt & Carr Architects (HCA).

The move has coincided with investment in IT and vehicles and has allowed MCC to create two full-time office-based positions to facilitate future growth.

Suzanne said: “Having committed to new offices at Daisy Bank House from the start we were able to have an influence on how our space was laid out were able to follow a bespoke approach to configuring the space for our specific needs. We already had a great relationship with Natalie Hewitt and Mark Carr, directors at HCA so it was easy for us to follow the project from inception in March to moving in in August 2018.”

Tim added: “On reflection it’s been an incredible journey to arrive where we are today. I’ve spent all my working life putting in long hours and always building business based on it being all about the customer. We pride ourselves on being hands-on and visible to customers and stakeholders.. We are experiencing rapid growth, but this is never at the expense of service delivery or support for employees and clients. We pride ourselves on the fact that customers can always talk to the decision maker by phone or by us travelling to their premises.”

MCC puts store in being integrated in the local business community. Suzanne has put a good deal of effort into making connections and building strong relationships with other businesses and clients.

Suzanne became President of the Staffordshire Moorlands Chamber of Commerce in 2017, a role which she will continue until late 2019. Suzanne added: “It’s been an honour to be elected President of my local Chamber of Commerce. The Chamber shares the same vision as our business in striving for growth through sustainable relationships and in increasing the prosperity of the local economy.”

So, what is the secret of a husband and wife team building a successful business? A prospect that may strike fear and dread in many a married couple. “Well defined roles!”, said Suzanne emphatically. “Tim looks after the operational service delivery whilst I deal with the commercial aspects including finance, compliance, HR and marketing.”

Tim added: “As the business has grown it has taken on a life of its own, however we both retain a clarity and focus of where we are heading. We are now extremely well positioned to continue onwards with the next phase of our growth plan.”