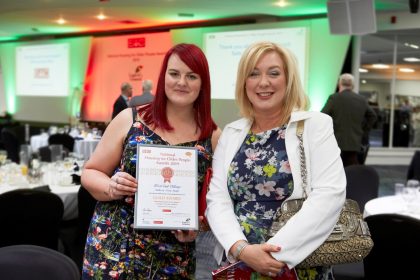 A Stoke-on-Trent retirement village has been awarded Gold in a national award for the quality of its accommodation.

The older people’s housing scheme, which provides independent living from over 55’s, was up against 300 other providers from across the UK and won one of the 9 gold awards awarded on the night.

Both residents and staff attended the awards and were delighted when they won as resident Elaine explains: “Winning the award is brilliant, we know it’s a lovely place, we know it’s the best!”

West End Village’s Scheme Manager Gina Cooper said: “It means the world to win the National Gold Award and it’s so nice to see that the hard work we put in is paying off. We love to have fun here at West End Village and it’s that which makes people feel so welcome. We’re so happy we’re going to celebrate with a party!”

John Galvin, EAC’s Chief Executive, explains the importance of the awards: “Specialist housing for older people plays an enormously significant role in helping them stay independent for longer. The security, support and great communities have a positive impact on individuals and reduce the need for NHS services.”

Earlier this year, West End Village won gold in the EAC regional award, where residents and visitors also voted. As well as accommodation, the scheme also provides communal facilities such as a gym, hairdressers and restaurant and hosts social events for both residents and the local community.