BLOCKBUSTING START TO 2019 HAS FILM COMPANY REELING IN THE CLIENTS 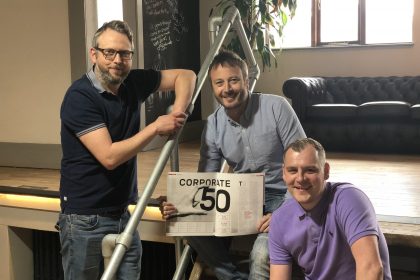 A blockbusting start to 2019 for Reels in Motion has been capped by a listing in the UK’s Top  50 Production Companies list by Televisual magazine. Stoke-on-Trent based Reels in Motion are the only Staffordshire production house to make the industry list.

Director Matt Hubbard said: “Our financial year has started with the best ever financial figures we have ever experienced and to make the top 50 for the second successive year is a fantastic achievement.

“The Reels in Motion team sat down in 2016 and committed to making the list by 2022. We have now made the Top 50 in 2018 and 2019 and this puts us in an elite category in our industry. It is fuelling success and we are now known on a national as well as a regional stage.

New client wins in 2019 include Saladmaster, Valour Hospitality, EU Automation and the British Chambers of Commerce.

Founded 16 years ago, Reels in Motion has grown to work for some of the UK’s major brands. Co-owners Matt,  Joe Gordon and Phil Bland have grown the business from small beginnings in an office at Staffordshire University business village and now have a 10-strong team. A major step change came with the opening of the company’s own studio complex, the Production House, Tunstall, in 2017.

“We have grown year on year since the start, but taking the leap of faith to open the Production House has been a huge boost,” said Matt. “We invested around £250,000 and created a state of the art facility which gave us the ability to shoot large scale productions in our own studios. Large companies from London, Manchester and across the whole UK are recognising Reels in Motion’s production values and are coming to Stoke-on-Trent to shoot corporate videos.

“The Televisual list is dominated by film makers from the big cities and we are so proud to be in there representing the Potteries and Staffordshire. It puts Reels in Motion in the top one per cent of video production companies in the UK and places us firmly amongst the elite in our industry.

“Our team of creatives have fully committed to our vison and making the Televisual Top 50, two years in succession is reward for all of the hard work, creativity, and passion that our team bring to all of our productions.  It puts us in position to continue our growth, providing more skilled, creative jobs for film staff in Stoke-on-Trent.”