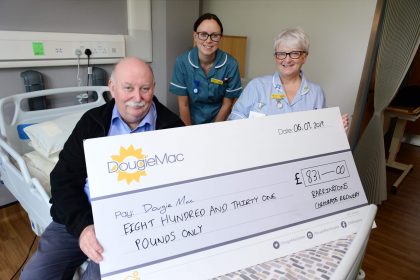 Hospice officials have received another welcome cash boost from a company behind a popular British-themed charity quiz.

The quiz, staged at Newcastle Golf Club, attracted teams of local bankers, lawyers and accountants who paid to take part and chipped in generously to a raffle.

It adds to the £20,000 raised by BCR and its sister company Barringtons Chartered Accountants over the years which has helped towards various hospice projects including new mattresses for beds in the Inpatient Unit.

Mr Wood, an accountant in the area for over 40 years, said: “So many local people have their stories to tell about Dougie Mac as it supports patients and their families at a time when they need it most.

“I was inspired to fundraise by the dedicated care of my mother in her final days and am delighted the quiz has become a much-loved fixture on the local business social calendar, attracting a good crowd every year.”

Staff working for the sister companies also combine to hold dress down Fridays, coffee mornings and whip-rounds as well as various fundraisers in their own right to boost hospice funds. Next is a Christmas jumper day.

Donna Adams, Head of Fundraising & Lottery at Dougie Mac, said: “We are incredibly grateful for the generous support of Phil and his team and can only encourage other local businesses to follow in his footsteps.”

Plans are in the pipeline for another BCR charity quiz next spring when supporting the hospice will be the driving force behind a team effort to stage the night.

BCR helps troubled businesses get back on their feet with specialist recovery and restructuring services.

For more information visit www.bcr-insolvency.co.uk and for Barringtons in Nantwich call 01270 623821.