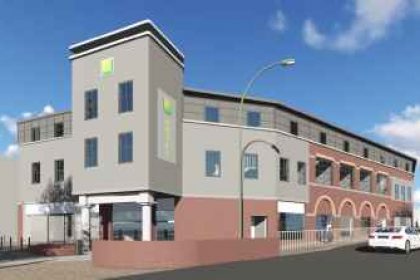 Plans have been submitted for a new 120-bedroom hotel in the centre of Stafford.

The proposal for an Ibis Styles hotel comes on the back of huge investment in Stafford in recent times – like the six million pound Odeon Cinema, major retail premises including Primark, B&M and Aldi, alongside new restaurants such as Nandos and Verso.

The hotel is earmarked for vacant premises on Hunter’s Row at the north of the town centre. The proposals are now being examined by planners and people will be able to comment on the application before a decision is made.

The plans for the hotel can be viewed at www.staffordbc.gov.uk/planning-public-access

Head of Development at Stafford Borough Council, Karen Tierney, said the move was further evidence in the confidence investors had in the county town. Over the last couple of months around half a dozen independent businesses have opened in Stafford and latest figures revealed footfall in the town centre was up on last year – with a higher increase than the national High Street average.

Part of the planning application to the Borough Council states the hotel would provide local jobs, help improve the night-time economy and increase tourism. It says the application ‘makes beneficial use of largely redundant retail space. Redeveloping existing buildings that have outlasted their previous use.’

Karen Tierney said: “There is a lot of work going on behind the scenes selling the opportunities our borough offers to major businesses – not only in this country but around the world.

“The feedback we get from investors is that the borough is an attractive place to invest, our council and partners help make it easy for businesses to locate or relocate to the area, our connectivity to the rest of the country is good, and they can see the substantial growth already taking place.”

The authority has already put forward an ambitious masterplan to develop land around Stafford Station. And earlier this year the Borough Council was one of only five authorities to have been awarded £750,000 to develop plans for a garden community near Cold Meece in the north of the borough which could provide around 10,000 homes, schools, medical facilities and include a new west coast mainline station as part of a sustainable development.