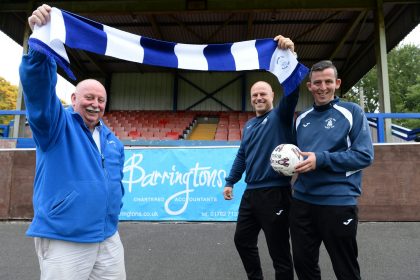 Football officials have won support from a firm of chartered accountants as they kick off a scheme to upgrade facilities at the club.

Newcastle Town FC is NOW backed by Barringtons Chartered Accountants for a fourth year as part of its commitment to football in the community.

“In the summer we re-branded as the Red Industries Stadium after teaming up with a local waste management company. We also had to carry out major pitch improvements after the hot weather left it parched. The grass needed a lot of work but is now greatly improved. Next we will be refurbishing the changing facilities which are original and need to be brought into the 21st century.”

The club, founded as a Sunday League in 1964, is now semi-professional with 28 teams from the FIRST down to under 7’s.

Director, Gavin Appleby, said: “The club costs around a quarter of a million pounds to run every year and without the support of businesses like Barringtons we would not be able to survive in such a difficult economic situation.”

Barringtons, based in Newcastle, supports the club with its payroll and tax returns.

Managing Director, Phil Wood, said: “Football bonds a community and we like to give back to the towns where we have offices and employ from the area.

“As a local man, I’m particularly proud of our association with Newcastle Town. The club has strong roots in the community and encourages youngsters to get out and kick a ball while enjoying friendship and the camaraderie of being part of a team.”